In 2012, I asked then principal (my boss) Dr. Linda Foster, if I could miss the first 2 days of school in 2017; specifically August 21st.  She, of course, thought that I was being funny but later learned that I was serious as there would be a solar eclipse in the US stretching from the Pacific coast to the Atlantic coast.  Two years after I asked, she retired so I made sure that the new principal, Dr. Cordell Jones knew of my plan. He said sure.  As the years rolled by, I would occasionally remind him of my plans.  He too was very supportive.  In fact, he said that if the system is set up right, the assistant principal should be able to be gone and school should run without a problem.

I had given it a lot of thought as to where I wanted to be so that I could witness totality.  Being in a place that was even 99 % of totality or cloud covered was not an option.  Those prerequisites coupled with the fact that I was going to use my SWA frequent flyer miles meant that I needed to pinpoint where I was going especially since I live in San Antonio, TX and we were a long way away from anywhere where totality would be.  I finally chose Nebraska.  I figured that at 1 p.m. in the middle of a cornfield the chances of rain or cloud cover in August that we would have a good shot at seeing one of the universe’s greatest shows.  We would fly into Omaha on August 19th.  Drive to Lincoln and hang out for a couple of days and then drive south about 30 miles and find our cornfield on the 21st.  That was the plan if all went well.  If…

Got to spend some time in Lincoln.  Love Lincoln.  Lots to see and great places to eat.  While visiting Lincoln, I posted a few pics on Facebook.  While eating lunch, I got a call from my former principal, Dr. Foster.  She began, “Where are you?”  I told her that we were in Lincoln.  Since she retired, she has traveled the world so it was shocking almost when she said that she was in Lincoln also.  They were attending a family wedding and were going to watch the eclipse just a few miles from where we had planned to do so.  She invited us to come to the ranch and eat brisket before the eclipse.  It could not have been a better situation.  We were going to get to watch in a comfortable spot as opposed to being in the middle of a cornfield.  And there was brisket!

Weather was awesome on Saturday but we started seeing some bad signs in the forecast for Monday, Eclipse day/first day of school.  Luckily, five years of thinking about this, I had a contingency plan.  I noticed that the line of totality paralleled an interstate to the west.  I also knew that if we had to travel far we would find it difficult to locate any rooms under a $1000/ night so I packed a small tent and a couple of those new inflatable lounge chairs.

Sunday morning, Nancy and I made the decision to leave the brisket behind and began driving west knowing that we had come all this way and we were not going to miss totality even though it would only last a mere two and a half minutes!  By the way, when I first started talking about going, she didn’t seem that interested.  As I began making reservations, I told her that I was going regardless of whether she went.  She then figured out that I was serious.  And even though my foot surgery on June 30th had depleted some of our travel funds, she decided that we could not miss a possible once in a lifetime experience.  Lincoln is on the east side of Nebraska.  So we figured we might have to drive several hours west but as we kept driving the forecast did not look good for all of Nebraska.  Wyoming here we come.

We finally get to Fort Laramie Wyoming and decide that the 90% clear forecast was the best that we could do.  Now for finding a place to stay Sunday night.  Tent sites were going for $200+ per night.  Motel 6 was advertised for $1200 per night, I kid you not!  Finally, we stopped into the local bar/restaurant in Fort Laramie and found that there were tent sites in the local park.  We went to city hall and were excited to find that they were $50.  Now mind you, I would have been happy pulling off to the side of the road and pitching our tent but access to water and other facilities seemed like a good deal.

We went back and ate supper with the locals.  The special was bratwurst and Cheetos!  The Guinness was extra.  The band was fantastic.  Afterwards, we left the small town and went out to the actual fort.  Although, we were going to lose a few seconds of totality watching from here, the spot was awesome and we would be sharing the moment with a couple thousand other science nerds.

We went back to our tent site.  Talked to our tent neighbors.  We set up and got ready to go to bed.  As the lights went out and we were just about to go to sleep, I could here a train in the distance.  Shut my eyes and thought about the two blankets that I was under might not be enough for the dry, Wyoming night.  It was about then, that this incredibly loud blast of train horn blasted a hole in my ear drum!  It sounded like it was right on us.  Nancy and I said almost simultaneously, “So, that’s why this place only cost fifty bucks!”  In fact, the train honked like 2 or 3 times at all of the town intersections (4).  Add to that the squeaking wheels!  Now, once or twice would have been tolerable.  However, the trains came as often as every 15 minutes but typically they were about 30 minutes apart which, of course is at about the amount of time that I would take to just about go to sleep having been awakened by the previous train.  Luckily, there was a two hour break from 3 a.m. to 5 a.m.  Now, you might think that that night was horrible, but no.  In fact, when we would hear the train in the distance, we would just start laughing.  The trains were so loud, that it was just funny!  We also knew that this was just part of the adventure in which we were just wingin it so that we could see the moon completely cover the bright sun and turn the day into night.

When the 5 a.m. train came through, we decided that we were done with trying to sleep as the air filled lounge chairs are not great for sleeping on, especially in a tent in which they barely fit and I was quite cold as someone next to me had stolen my blanket.  Add to that, the vinyl lounge chairs made quite loud/obscene farting sounds every time that you move.  I just knew that along with the train, we were keeping our tent neighbors awake.  We broke camp and made our way to the fort.  We knew that getting there early would be important as a lot of people would be there.  We arrived to find hundreds of cars lined up to get in when the park opened at 7 a.m.  Luckily, we made it in.  However, we had to park in a field a long way off.  I was on crutches and my foot was in a boot.  But we were determined to find a beautiful spot to see the eclipse.  Close to the fort, I saw a bunch of trees where no one had set up.  I knew that by noon, shade would be critical.  It turned out that the leaves allowed light to shine through and you could see projections of the eclipse on the ground.  Bonus time.  Several astronomers set up some very impressive telescopes.  So lots of people ended up hanging out with us.  Since we had about 6 hours of waiting, we did what we do best and that is make friends.  We met some great folks from all over the world who had been planning this for as long as I had.  Many of which had migrated here as well due to the weather.  Everyone was in luck… not a cloud in the sky!

Several hours before the event, the moon starts to partially cover up the sun.  To look at this, you need special glasses.  Being at a national park, the rangers were roaming around handing out glasses.  This was so nice.  I had ordered glasses six months earlier but forgot where I had stored them #seniormoment.   I was able to borrow some from my school but they were not in great shape. We watched the partial eclipse as it slowly enveloped the sun.  You could tell that people were getting excited as the time drew closer.  However, even at 90% it was still very bright.  In fact, you cannot look at the sun even when 99% is covered.  It’s still too bright.  Then it happens.  You see the diamond ring effect, Bailey’s Beads, and then you see the eclipse.  There is a huge roar from the crowd and you can take off  your glasses and look at the sun… check that, the moon and the sun’s corona which is it’s atmosphere.  It is suddenly night time in the middle of the day.  It looks like dusk 360 degrees around you.  It truly is dark.  The eclipse is beautiful.  I cannot describe it any other way.  Once it happens, you then know why everyone who has seen one says that it is a must see event.  I even get chills as I write this thinking of the moment.  I am video recording the event.  During the whole time all you can hear are oos and ahs and omgs!   Two and a half minutes later, there is another diamond ring and then it is daylight again.

And just like that, everyone starts heading to the parking lot/pasture.  While the partial eclipse will continue for a couple of hours, the headliner of this concert has come and gone.  As we drive through remote Wyoming, we find what was once roads that might have 2 or 3 cars per hour are now stop and go (mostly stop) traffic.  It really is like all across America that everyone is leaving a rock concert as the totality goes by.  Even Google Map had no shortcut suggestions.  Nine hours later, we are back in Lincoln to find the nice hotel room that we had paid for and left vacant for one night of three.

Once we got back, we began planning our next eclipse trip.  However, if we are still in San Antonio in 2024, we will experience totality again.  Come join us.  I promise it will be one of the greatest experiences of your life… bar none. 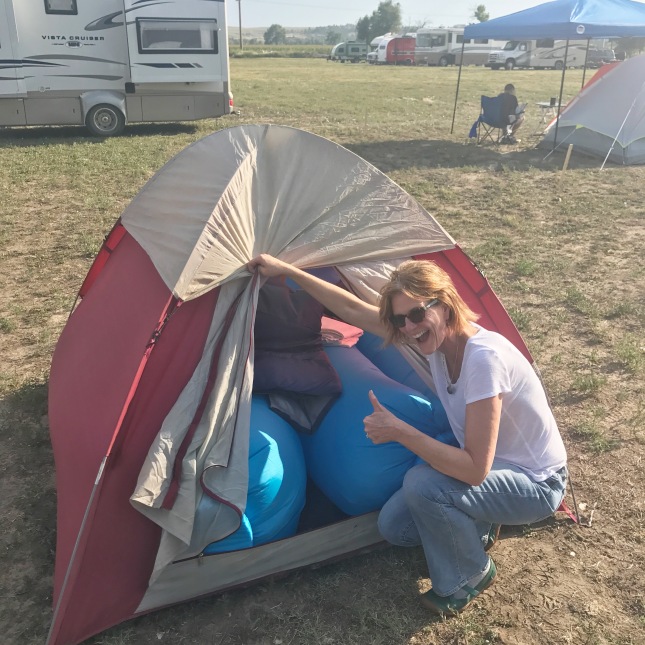 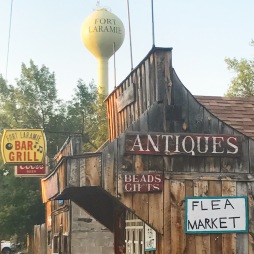